Many boats meet undignified ends, scuttled, wrecked or just abandoned. Some though, are restored to life. In the summer of 1979 I was wandering through the storage field of Essex Isle Marina in Connecticut when I came across a long-abandoned gaff rigged Wianno Senior Knockabout Sloop named Simba.  Built in 1923, at some point she’d been left to rot in storage, but immediately her lines appealed to me.  It was the beginning of a long relationship, and the foretaste of how much her launch year would influence my life. 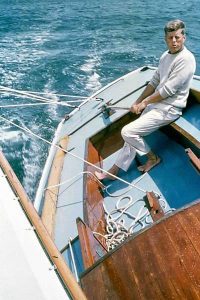 Since 1914, Wianno’s have had a reputation for rounding the mark and slicing past in a flash of brightwork, canvas and speed. Their ease of handling and seaworthiness made them popular both as racers and coastal voyagers. Fantasy #11 can be seen at Mystic Seaport Museum and Victura #94 – the boat purchased by Joseph P. Kennedy and sailed by his children and grandchildren – is on show at the John F Kennedy Memorial Library.

I found Simba to be able, safe and challenging – as did the many friends who sailed her – and for me, learning to get about without the fallback of auxiliary power allowed me to develop patience and a sensitivity to wind and tide that served me superbly when I moved, a decade later, to a Rhodes Offshore 40. 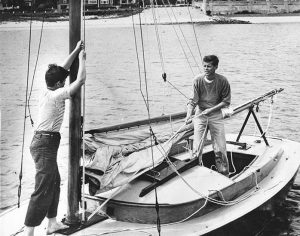 By 1986, the Wianno Association members were considering a fiberglass version.  A few years earlier, Sparkman Stevens had hauled in five wooden Seniors at mid-season, weighing and electronically measuring each one.  Using that study to determine the ideal characteristics of a Senior, the vessel was re-created as a three-piece fiberglass hull, deck and interior.  The fiberglass Seniors look great and sail well, but as a veteran of the wooden sloop, I notice that the sound of the boat has changed.

Simba, originally Hull 51*, was a leaking bucket when I bought her; years of hard racing on Nantucket Sound had put enough leaks in the bottom that just keeping her bailed would have exhausted a strong man and the cabin seemed only to filter out leaves.  She was valued at no more than her unpaid yard bills – $500, so when I’d paid off her dues, I had her carefully loaded onto an overland boat carrier and moved from Essex to East Haddam, CT.

Her new home was the back yard of the wood boat repair shop run by Robert K. Wilmes whom I hired to serve as consultant for her restoration. Included in his consulting fee were storage rights on his property and the use of his tools, so, in season, we would meet every Friday evening for dinner before, on Saturday morning, list in hand, he would indicate exactly what I would need to accomplish in the next two day’s labor. I would leave NY City center with sufficient time to make the 15:30 Amtrak Boston train arriving at Old Saybrook station at 18:04 and then would come 48 hours of patience, practice and learning because, at least for the first few months, it was less accomplish than re-do. Getting the cut right was a literally painstaking process – winching in the curve to the right fit caused a beam to break and the wood flew back to within three inches of my head – a fraction further and I’d have been dead. 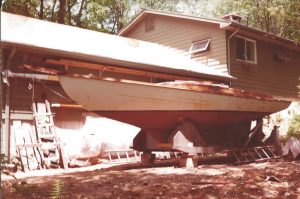 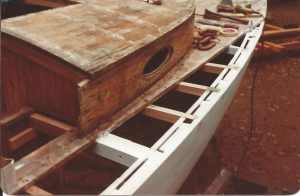 Wianno Seniors were constructed from native white oak which was used for framing the stem, keel, deadwood, sternpost, knee and horn. Simba, whom I renamed Corsair, was carvel planked using 13/16-inch cypress. This was standard until 1932, but Wiannos from that date onward had planks of Honduras mahogany.  They all had 600 lbs. iron on the keel as external ballast.

Bob Wilmes directed me to start with the deck, deck beams, demo the cockpit, cockpit staving, so that I could inspect, repair or sister her frames, which were 1 1/2 inches square, spaced 9 inches on centers.  The original frames were dovetailed and wedged in the keel.

Then, under his tutelage, I moved onto deck beams – oak spaced 10 inches on centers – and added a watertight cockpit floor made of fir plywood 5/8-inch-thick, before fiberglassing the surface.  The cabin trunk was the steam bent white oak that had nearly cost me my life. 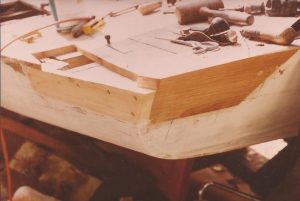 The new cabin deck was 3/8-inch marine plywood, canvas covered, glued and ironed, the same for the process of fixing the deck canvas, covered with white oak rub rails I had fashioned.  The hull itself was wooded – removing all paint and exposing the bungs.  Following their removal, I drew out as many of the galvanized fasteners as I could, replacing each with a new stainless steel one.

The hull above the waterline received a coat of Penetrol followed by a primer and then Interlux French Gray with white intrusion line. The decks, received three coats of buff. The outside bright work was given two sealers and eight coats of spar varnish.  Below the waterline, after the garboard and shudder planks had been replaced by Bob himself, she received one prime coat followed by two coats of antifouling green.

By the time she was ready to launch in June 1982, I was ready to move from the NY City Centre Joffrey Ballet and accepted a position at the Guthrie Theater. It was, as people say today, a no-brainer; a new wood Wianno Senior would cost me $40,000 and anyway, I had thousands of hours literally grained into the wood of the boat, so I negotiated her transport to Minnesota as part of my relocation costs. 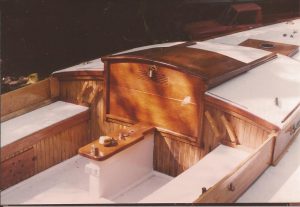 In Minnesota, I changed Corsair to Kirby paint, after consulting with the restoration team at Mystic Seaport.  They advised me to move away from paints that contained modern acrylics as these would harden the wood. Acrylic-free surfaces definitely made prepping the topsides much easier each spring.  Another advantage of moving to Minnesota was that some of the many talented craftsmen in the Guthrie scene shop were available to hire for boat work on the side.  The Wianno’s new tiller, fashioned as a copy of the original, was the result of one such collaboration.

Boat restoration – a bug you can catch

There was another unexpected outcome to the Minnesota move. Boats are one of those places that great friendships spontaneously and naturally develop, and it gives me great pleasure to recall teaching my boss, Ed Martenson, to sail.  He caught the bug, has restored two boats of his own, and we’ve crewed on each other’s boats for over a quarter of a century. 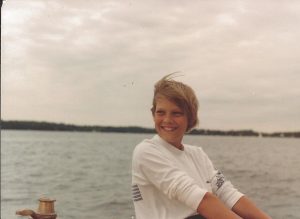 The history of Hull 51

I sold Corsair following the 75th Anniversary of the Fleet at Osterville in 1989, where she won Best Prize for Restoration. But she wasn’t done with me. One evening I found myself wondering how many fiberglass Seniors had actually been built? Going through the Wianno Senior Class Association‘s members list by hull number and comparing that information with a page from the 75th Anniversary book revealed who had owned a Senior in 1935.  I discovered that, at that time, Hull 51 was named King Tut and owned by Lawarson Riggs Jr of Woods Hole.   A Google search later I had turned up a letter from his law office written, as Treasurer of the Woods Hole Institute, to the Rockefeller Foundation.  Riggs was born in St. Louis, where I went to college at Washington University.  He attended Columbia Law School and lived at 70 W 11th. When I was a similar age, I lived at 20 E 8th. His law focus was Estate and Tax, an area I follow intently as a career fund raiser. The parallels intrigued me. 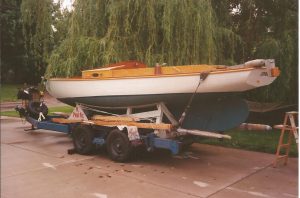 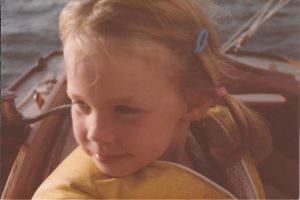 In 1989, Victor M Tyler purchased Corsair through my boat broker and renamed her Hilda. Several months later I received a registered package containing her name board and brass letters along with a note asking if Corsair had ever been moored off of Bracketts Point?  I called him to confirm – George and Sally Pillsbury had indeed been gracious enough to invite me to place a mushroom anchor off their property.  His response was a deep sigh; he had visited his cousin Ella Pillsbury who lived right next door and Corsair was part of a boat class he had long known.

Vic died on October 3, 2017. Vic was born on October 10, 1928 in New Haven, Connecticut, the son of Morris and Eugenie C. Tyler. Vic attended Milton Academy, graduated from Phillips Academy Andover (1947) and Yale College (1951), where he majored in physics and philosophy. He served as a first lieutenant in the U.S. Air Force, and was stationed in Iceland. Vic earned a SB in electrical engineering at M.I.T. (1955) and a Master of Engineering at Yale (1958). After working at EG&G throughout the 1960’s, Vic and five colleagues started their own company, Concord Computing Corporation, in 1970. Vic loved music, opera, woodworking and farming, genealogy and history, the ocean and travel with his family. Hilda remains in the Tyler family and sails out of Chatham, MA.

With Corsair gone, my awareness of 1923 slipped from sight, but it was simply waiting under the surface. When I retired to Tampa, Florida, I purchased a bungalow and cottage built in … 1923. It took me a year of restoration to achieve the 1920s ambience I wanted for the properties and when I’d finished, I named them Erehwon Retreat – vacation rental properties in Tampa that are lovingly crafted reminders of the glories of the Roaring Twenties.