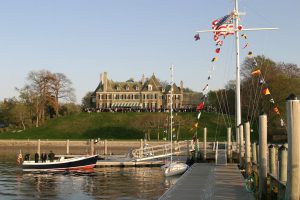 I always looked forward to a Maine cruise; the coast is certainly among the finest in the world. Although not in our original plan, arriving in Block Island in mid August and with Brooke off to a dude ranch with her grandparents, my wife suggested we plan a month’s sail from Block in order to savor the delights of autumnal cruising in Maine. Apart from a couple of overnights on the way south, it was to be a leisurely sail, with anchorages every night including a first for me at Isle of Shoals.
Our trip back to the Cape Cod Canal, we took a mooring ball at Parker Brothers, Cataumet, MA in order to put in a few days attending to repairs. Our next port of call would be Hadley Harbor, Nashon Island.

Many who sail weekends often think they either want to be fully independent or they are sailing in company with other yachting friends and want little or no new company. What makes cruising so much fun is even if you don’t know the yachtsmen in the anchorage or in a new marina, we all have the ability to become a source of support, all it takes is getting in your dinghy and cruising the anchorage. Everyone looks for a boat name; sometimes you’ll see the same name more than once (Windsong, Serenity, Island Time, Aquaholic, Second Wind).
Over the 26 years there’s not been a cruise in which while lying at anchor, someone knocks on the hull saying we were anchored with you in xxxx back in ’92 or two seasons ago. Siskiwit, which is Ojibwa for “trout” turned out to consistently offer social connections because dinghy riders wanted to know what Siskiwit means.

Cruising is filled with tales of trying to hitchhike and a driver who picked us up and wouldn’t let us pay to Doug & Fran Shryver who first asked about the name while taking the launch service into Parkers and later that evening at Cataumet’s famous “Chart Room” long known for a hours wait for a table. We saw them again 9/14-15/ 1992 on a mooring ball in Hadley’s Harbor. Since we had met a few days earlier at Parkers, he rowed by for a gam, and to tell us where we could and couldn’t land on this famous Forbes family estate. We invited them for sunset cocktails and the next morning rowed over offering us their members’ guest pass to the New York Yacht Club in Newport including a meal.
This was indeed special as the New York Yacht Club acquired Harbour Court following the death of Anne Brown in 1985. John Nicholas Brown II  had passed in 1979. 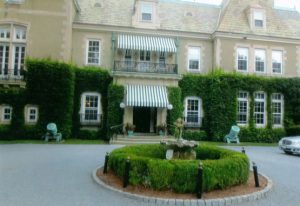 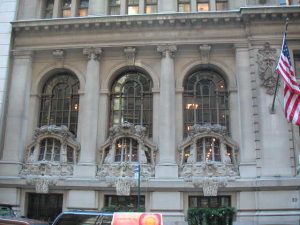 Standing on eight acres overlooking Brenton’s Cove, the Renaissance Norman-style mansion was completed in 1906 for the John Nicholas Brown family and in 1974 I called on Mr. and Mrs. Brown to present my findings on a Feasibility and Use Study of the old Providence Theater, then an aging movie palace renamed Ocean State Theater. They had been one of a consortium of old family members who wanted to know if the theater would be viable as a Performing Arts Center.
So here was an opportunity for a free mooring ball, a new chance to gain access to the famous and see what had been done to Harbour Court in the eighteen years since I had called on the Browns. This was a very generous response to sunset cocktails. The bottom line of that year aboard was discovering people who have very little were as generous as those who had much.

During my work in New York City I had been to the small alcove known as Palm Court at the New York Yacht Club’s headquarters on West 44th Street which may be the loneliest space in Manhattan. For decades it was graced by the America’s Cup, yachting’s grandest prize. But for the last 33 years, the tiny room has harbored only memories. When working for the NY City Center Joffrey Ballet, I met Emil Mosbacher at the Palm Court as he was serving on the Gala Ticket Committee for a performance of Lena Horne, Gene Kelly and the Joffrey at the Metropolitan Opera. Emil Mosbacher was a two time America’s Cup victor, Sports Illustrated said of him, “the finest helmsman of our time.” During the US Bicentennial he led Operation Sail and repeated in even grander scale the Cinquecentennial of Columbus Voyage to the New World. Funny I was so nervous meeting him but he opened with asking me about my Naval Service as he served during WW II aboard a Minesweeper in the Pacific.
Before 1983, in the 132 years of New York stewardship, the cup was an enduring West Side fixture. But that year, a renegade Australian crew stormed the figurative gates and swooshed the cup Down Under. In 1987 — Dennis Conner’s comeback year — a deeply flawed New York campaign bent on retribution received a resounding defeat. On 44th Street, thoughts of the vanished silverware were best left unspoken.

We had breakfast in Harbour Court and while Brooke was marveling at the size of the bathroom and shower, I was staring out of the windows thinking of the number of times I entered Newport Harbor on the bridge of the USS Samuel B Roberts (DD 823) and USS Detroit (AOE 4) as navigator. There were also musings of Fox Island Thorofare and lunch at Moores Harbor, Isle au Haut, and crab cakes at the Castine Inn. But it was late September and winter was coming so we were off to Montauk, LI, Sag Harbor and Essex, CT and the Chesapeake Bay.