When the Emma C. Berry sailed into Noank, CT July 4, 1966 she was celebrating her 100th. birthday. I believe it was the first time in history that a boat sailed back to the port-yard where she was built and cosmetically in “finest kind” condition. In most cases either the yard had long been out of business or the vessel had sunk. Three years later she was donated to the Mystic Seaport. F. Slade Dale owner of a small yacht basin and Yachting magazine author found her in Jonesport, ME in 1931 following the completion of the Manasquan Inlet jetties. My father had kept a cabin cruiser at Dale’s yard for a period in the 1940’s prior to our moving to California. My family later moved to New York City. During a summer vacation in 1954, we stopped by the “old yard.” That’s when I met Dale. Seeing the Emma C Berry out on the N dock, I can remember Dale telling me he had listened to sea stories of Captain Joe Tilton and the Emma C ‘round a hot stove in Hulse’s General Store and he couldn’t believe his eyes when he saw the name on the old schooner in Jonesport. He said, genuine or not, this was the boat he would buy. And he did so by candlelight, not daring to allow himself too close an inspection. 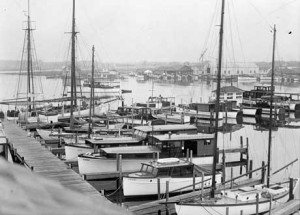 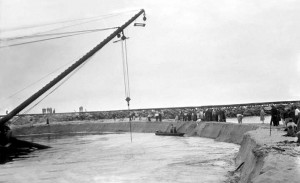 Dale gave the “Emma C” her first major restoration in 1933-1934. Her original dimensions were unchanged. Rigged as a schooner she was 39’2” on deck and with her bowsprint LOA 47’. She was 14’6” on the beam and drew 6’. Dale restored it in 1933 and 1934 following a Nov 10, 1932 storm in which Barnegat Bay rose 6’ and flooded much of Bayhead. He registered the ship in Philadelphia. Dale retained ownership until it was donated to the Mystic Seaport in 1969. 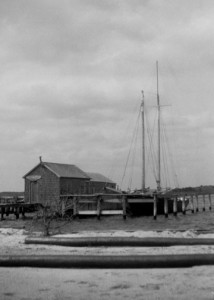 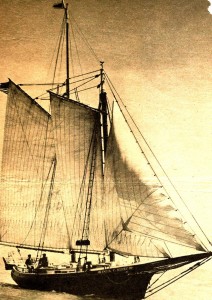 My band master, music teacher and mentor was Captain Dayton O. Newton. In the summers Newt was the owner/Captain of the Schooner Adventure out of Camden, Me. I can’t recall when I mentioned the existence of the Emma C to Newt but one day following a private clarinet lesson in the winter/spring of 1962 (my last year at Farragut) Captain Newton said that he would have to arrange for another day for my next lesson as he and the head of the Naval Science department Captain Crosby would be going up to the Morton Johnson Yard in Bayhead to look over the Academy’s boats. At which point I interjected “have you ever seen the Emma C. Berry up there?” From that simple exchange over ensuing months, Captain Newton made inquiries and introduced the idea to the Administration of the Academy. The following academic year the boat was brought to the Toms River where proud Cadets went to work on her. No attempt was made to rebuild her but they made her beautiful and seaworthy. Her hull fashioned in pine planks on birch frames had been hauled, caulked and painted. She got new rigging and sails and her bowsprint refinished. 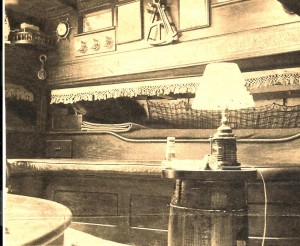 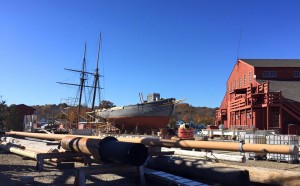 By 1965 she was taken on a shakedown cruise up the Hudson to Troy, NY. I was able to get off away for a few days to join the crew I think in Nyack, NY. She carried a cargo of historical documents to the Albany Historical Society. During that cruise Pete Seeger came aboard for a song fest. He was raising attention to the state of the Hudson River and his desire to build a Hudson River Sloop Clearwater. Such an iconic folk-singer/songwriter using his influence to defend the most precious natural resource the planet has to offer. A year later the Emma C Berry sailed back to the Deacon-Palmer boatyard in Noank on her Centennial cruise. Three years later Dale contributed the Emma C Berry to Mystic where she later received a total restoration. I was able to sail with Newt one more time in 1969 on a cruise out of Annapolis aboard a beautiful contemporary sloop but I can’t remember any of the details just the pleasure of long conversations with one of my father figures.

I would visit the Academy in subsequent years and quietly smiled seeing the Emma C Berry getting a great deal of attention. I started to write this story because Captain Newton was born 11 December 1908 which would make him 107 if he were alive today.

A recent book has been published Celebrating the Emma C. Berry by Lawrence Jacobson who passed on just after finishing his book, his gift to the community in saving and sharing the Berry’s story just in time for her 150th birthday June 2016.

Mr. Jacobson’s book can be found on Amazon.