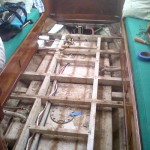 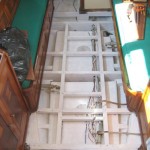 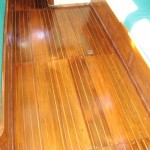 Every boat needs to be stripped at some point. The entire hull and deck and coach roof of Siskiwit had gel coat removed and awlgripped, but, since we were pulling up the cabin sole, it provided the perfect timing and access to the entire bilge. A common estimate is this should be done every 20 years, assuming small or medium-sized patches get partly stripped and then painted over about once every 5 years. Happy this is done, now for the cabin sole.

We removed all of the sole boards which are solid teak planks approximately 1″ thick. The planks have dadoes, or grooves, sawn into them into which are fitted the light colored wood strips. We are not certain that this wood is holly, the discoloration of the decades makes it difficult to determine.

Many of the sole boards were still fastened with what I assume were original mild steel screws, many of which were severely wasted away. These often needed to be broken off, drilled or driven out with punches.

The boards were then sanded in several stages, all with hand-held power tools, primarily a belt sander and a Festool 6″ dual action orbital sander. It required sandpaper as coarse as 24 grit initially to remove 42 years of existing finish and enough of the wood to achieve an acceptable surface for refinishing. Some scratches, dents and stains were too deep to be reasonably removed. These created a nice “patina” which I felt is appropriate for a boat forty-two years old.

Next any splits, damaged screw holes, broken edges, etc. were repaired by gluing, installing bungs or small dutchman repair pieces to return their original shape and structural integrity. Simultaneously, we examined all of the sole framing members and found several cracked, rotten or sagging beams all of which contributed to the overall unlevel, loose, creaking feel of the sole. These beams where either repaired, replaced or shimmed until the entire sole frame was a level plane ready to receive the freshly refinished sole boards.

I chose to refasten all of the boards, leaving the new silicon bronze wood screw heads exposed so as to make removal and bilge access easier in the future. The boards were varnished with Interlux Schooner varnish, a traditional oil based varnish. They were sanded to 80 grit prior to initial coating and then 220 grit between coats. All accessible bilge surfaces were scraped, sanded and painted while the boards were removed.